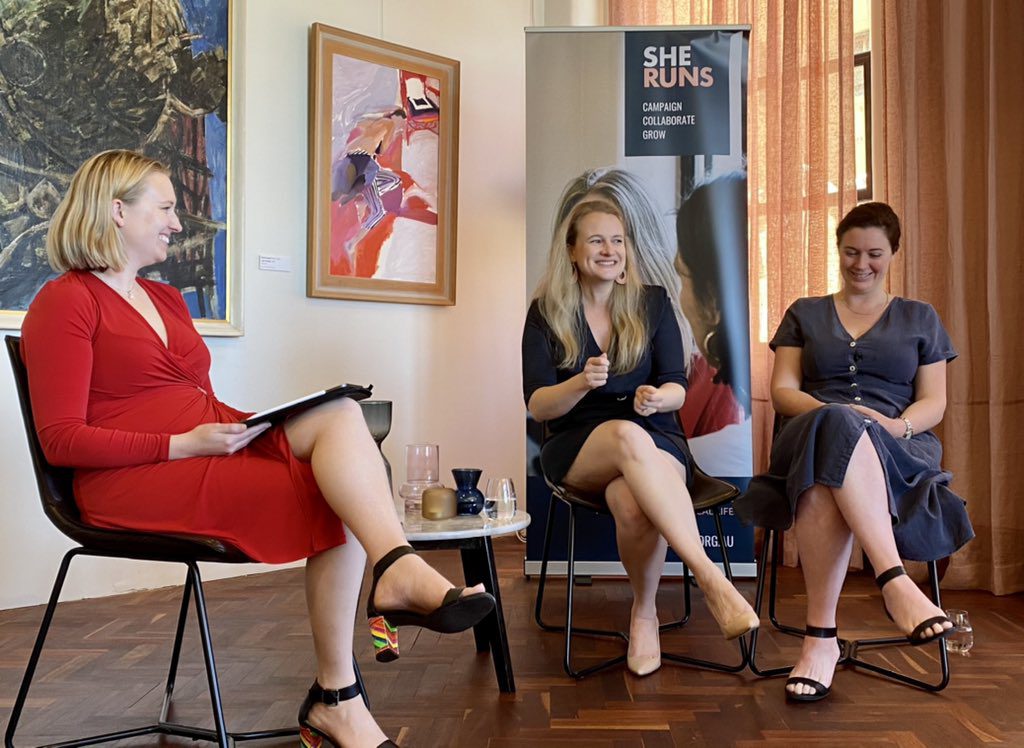 Running for the Federal Senate

Recently I was asked to speak at the inaugural She Runs Campaign School in Perth, a program to encourage more women to run for politics.  They were keen to hear about my leadership development work that empowers people from diverse backgrounds to step up and lead AND also about the time I ran as an independent candidate for the Federal Senate.

The time I ran for federal politics

I was 21 years old when I ran for federal politics.  It was an incredible experience that taught me so much and influenced my future steps (albeit not in politics).  So how did I come run as an independent in 2004?
It’s actually a funny story.  2004 was a very different time in politics.  There weren’t many independents that ran at all back then. So much so, the morning TV show, Sunrise started a media campaign to encourage their viewers to run as independents at the next election which hadn’t been called at that stage.
21 year old me had had some experience with politicians and politics through my teenage years.  While being involved in my community volunteering, I had the opportunity to meet with, talk and connect with many of my local members of parliament (state and federal) and also meet the Prime Minister, Premier and Minister for the Environment.
So when Sunrise asked viewers to send in videos sharing what you would do if you were a Senator, I was happy to share my two cents worth.  Next, Sunrise were showing all the videos and had chosen three people from each state to fly to Canberra to talk about what it would mean to run for the Senate.  We got the opportunity to meet and speak with politicians and then we recorded a one minute pitch to be shared again with viewers.

This is where it turned into, what I call, ‘political pop stars’ where viewers were invited to vote for their favourite Senator-to-be, for the chance to win $10,000 to go towards your costs of running in the election. Lo and behold, I won the WA viewer vote and was awarded the funds!  On the 29 August, the election was called for a short 6-week campaign leading up to the election date on the 9 October between Howard and Latham, only the second Federal election where I was legally able to vote!
Like every opportunity I’ve come across, I took it on and gave it everything I had.  I printed flyers and posters, got T-shirts made, organised a website and started talking to people.  I used the opportunity to attend every networking event I could, where I focused on three key groups – young people, women and small businesses, asking people what they thought of politics and what the community needed. I spent many mornings out on busy street corners in Perth during the morning rush and tried to catch people that way!  It was especially useful when I had the couple of opportunities to speak on Sunrise during the campaign too.

Number #1 on the Ballot

I was drawn first on the ballot sheet, having found a running mate and entered as a group (as opposed to being an ungrouped independent) and getting the required number of signatures.  Another interesting part of the experience was being involved in the preference deals including with the main parties as well a whole range of smaller political parties that I had never heard of before.  What is most interesting to me was on reflection was just how so important those preference deals can be. In the end, I polled over 4,000 first preference votes and got pretty close once the preferences started to fall. It definitely shows the power of these preference deals to catapult someone into a seat. Over the years, I’ve noticed how many independents have, in fact, reached a seat on far less first preference votes than I received!
So what were my lessons from the experience?
1. I experienced the huge lack of trust in politicians.  This was so stark for me moving from a 21-year-old community volunteer to a political candidate.  I could feel some doors closing (or being slammed) as people and groups not wanting to ‘be political’.  I don’t think this has changed much except for a few marked exceptions. There is much opportunity to redefine the role and perception of politicians.
2. I realised how little people knew about our political system. My most asked question was what seat I was running for in the Seat and, of course, the Senate is divided by states not seats. I think there is a great opportunity to update our political system too. I believe the adversarial nature of politics is quite out-dated and there is opportunity to look around at how other countries organise their governments as well as newer forms of participatory government such as citizen assemblies.
3. Running for politics is doable – anyone can do it.  Bring people together.  Do things differently.  You don’t have to buy into the ways things have always been done.
We want and need leaders with character.  And if Zali Steggles or Cathy McGowan’s experiences are anything to go by, now is the time to put yourself forward.  We need leaders driven by the greater good rather than those driven by ego, status and party politics.

To be profiled in the upcoming online course on purpose.

Why we need Greater Good Leadership more than ever?

Our Annual Review for Alyceum in 2021

2021 has been an incredible year for Alyceum! With so many wonderful programs, participants and…

Our Annual Review for Alyceum in 2020

2020 was the year no one expected.  It highlighted so many of the pleasures we…